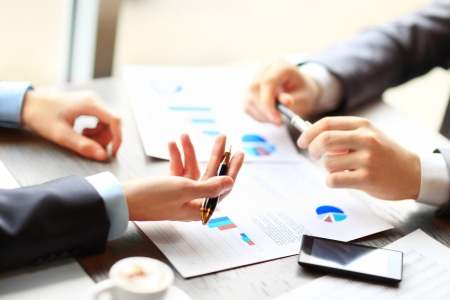 The auditor's role is to reassure shareholders and third parties that a company's financial statements give a true reflection of the performance and financial situation of the entity in question.
The permanent nature of their mission , as well as the advice they provide during the mission, make them one of your company's important partners. The auditors are registered on a list established by the Appeal court.

The Auditor's appointment
The obligations that a company has to fulfill regarding its choice of auditor, vary according to the size or status of the company, and it is also possible for a company to voluntarily appoint an auditor without there being a legal obligation for it to do so.
While companies have a certain leeway in their choice of auditor, there are also certain rules to respect. Moreover, specific checks regarding the auditor's independence and neutrality are necessary before the auditor's appointment in order to guarantee  the efficiency of the  legal audit .

Which companies are obliged to appoint an auditor ?

Obligation due to legal status
The appointment of at least one statutory auditor is obligatory for public companies whatever their size (c.com.art.L225-2218). The same  applies to joint stock companies (c.com.art.L.227-1 and art.L227-9) and partnerships limited by shares (c.com.art.L.226-6).

Obligation due to exceeding certain thresholds
For general partnerships (c.com.art.L.221-9), limited partnerships (c.com.art.L222-2  which leads to c.com.art.L.221-9) and private companies (c.com.art.L.223-35), the appointment of an auditor is mandatory when these companies fulfill two of the three following criteria:
-balance sheet total, corresponding to net assets over 1 550 000 euros,
-net pre-tax turnover (namely the net amount of products and services from its   daily core business)  exceeding 3,100,000 euros,
-the average number of employees  linked to the company by a permanent  work   contract  exceeding 50 (decree 67-236 March 23rd 1967, art.12).

Facultative appointment
A company's legal status may require the appointment of one or several auditors to certify the accounts. General partnerships, limited partnerships and private companies may also decide, unanimously or by majority depending on the company structure, to appoint one or several auditors during a general  meeting. The facultative nature of the appointment has no impact on the auditor's mission.It remains a legal mission and no abbreviated mission exists for auditors voluntarily appointed by companies (c.com.art.L820-1).

Who to appoint ?
In order to ensure the reliability of the audit, it is necessary that the chosen person should have the adequate technical skills and moral qualities.

A registered auditor
Only auditors registered on the Regional Commission's list established by the Appeal court may have claims to the title of statutory auditor (c.com.art.L.822-1). The auditor's presence on this list depends on the auditor's home address or the headquarters if the activity is carried out by a company.It is important to note that while the official list of registration is established according to region, the auditors may exercise their profession  nationwide (decree 69-810 of August 12 1969, art.2). Accordingly, a company whose headquarters are located in Paris can appoint an auditor registered on the Appeal court's list in Bordeaux.

The legal framework
The auditor's function is incompatible (c.com.art.L.822-10):
-with any activity or action which could bring into question its independence
-with any salaried work, except for teaching or employment in an auditing or    accounting firm
-with any direct or indirect commercial activity

Forbidden and risky situations
Some services are forbidden for the auditor. He can not provide services  of the following nature to the entity whose accounts he is certifying (decree 2005-1415, art.10):
-personnel recruitment
-legal drafts or advice
-implementation of internal control measures
-contributions and merger audit

How to appoint an auditor ?
The auditor's appointment must respect certain legal formalities, and pre-supposes both sides agree concerning the mission's modalities.

Choice of a suitable partner

The Power to appoint
Except for statutory appointments, auditors are chosen at the general meeting of the company in question or by an analogous structure, permitted by virtue of the rules  applying to other people or entities. (c.com.art.L.823-1).

Mission acceptation
The auditor must carry out specific diligence before accepting the mission.
Moreover, fair remuneration of his work, according to a remuneration scale, will guarantee the best conditions for the mission's execution.

Publishing formalities
In order to guarantee transparence regarding third parties, the auditor's appointment is subject to publishing formalities. In the event of a company appointing a legal controller, an ad mentioning the auditor's name, first name and address must be included in  the legal ads.Similarly, the minutes of the general meeting during which the auditor was appointed must be filed at the Trade court and be mentioned in the BODACC (official bulletin).Finally, registration on the Trade and Company register is required. That is why the names of the auditor(s) and staff are mentioned in the K-bis extract of the company.